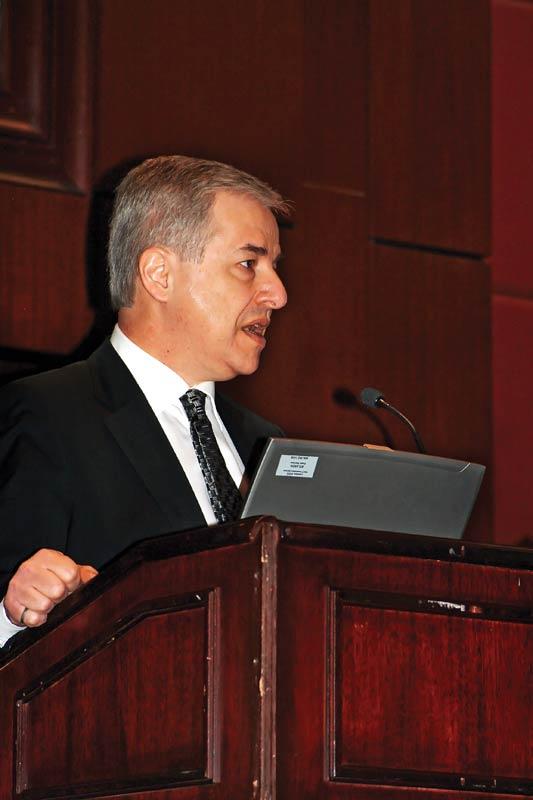 Many of the attendees also participated in the Bio-Energy Symposia & Expo held immediately preceding PELICE at the Omni Hotel, which was also sponsored by Panel World and GRI. Twenty PELICE exhibitors also exhibited at the Bio-Energy event, which in itself featured 30 speakers and moderators and 48 exhibitors.

This was the second PELICE, which is held every other year, and the first Bio-Energy Symposia. PELICE was held in the Grand Ballroom, while Bio-Energy took place at the Atrium Terrace of the Omni.

“I think most people probably left feeling like they deserved a diploma,” says Rich Donnell, co-chairman of the event and editor of Panel World. “I’ve never seen so many great minds from the panel industry converge on one place and deliver the variety of presentations on technology and issues as I saw in Atlanta.”

Donnell says the show sponsors always conduct a survey of attendees immediately following the event, and the one question they pay especially close attention to is if the attendees felt they found something in the presentations or in the exhibits that could be useful to their business. “Ninety-six percent said they may have or definitely did find something they can take back home,” Donnell says. “That’s really the whole point of PELICE.”

Not surprisingly, given the economy, the crowd was down slightly from the event held in early 2008, but as USNR-Coe VP Alan Knokey commented, “If PELICE can do this now, think about what it will be like in a strong market in two years.”

Donnell says one aspect of PELICE that the organizers worked on was pulling in more international participants, and as a result industry personnel were on hand from Austria, Germany, France, Belgium, Malaysia, South Africa, Sweden, India, Italy, the United Kingdom, as well as Canada and the U.S.

Godfrey, who has started up several panel plants, spoke on financing an independent wood-to-energy plant, referring to lessons learned from his OSB ventures.

He said a pellet plant for example has a “scary” cost curve compared to OSB.

He also noted that OSB always has some demand and a new mill has the lowest operating costs, while pellets demand could disappear with reduced oil prices and an older mill has the lowest costs. Also, the raw material availability and sourcing for a wood-to-energy plant is potentially more volatile with international factors coming into play, compared to the North American nature of the OSB raw material competition.

He did note that sales contracts for pellets could possibly make demand more stable than OSB demand.

Godfrey concluded that wood-to-energy financing is more difficult and has a larger collection of risks than OSB. “Nonetheless, some mills will be built, with the degree of success to be told in time.”

Sufrin of Atlas Holdings spoke on “Managing through the Recession and into the Recovery.” He noted that Atlas Holdings has built seven “platform” companies in industrial sectors including wood products, building materials, pulp and paper, capital equipment, packaging, steel mill services and metal products, and they employ more than 3,000 and generate $1 billion in revenue annually.

He emphasized the “culture and capital” performance of the business. “Long-term productivity of a business is only as good as its culture,” he said. He added that they capitalize their businesses for the long-term to comfortably withstand the inherent cyclicality of most basic industries.

With regard to capital, he relayed these rules:

Sufrin defined the Atlas culture: “By creating an environment where employees can reach their full potential, our employees succeed, and so do our businesses.” Thusly Atlas emphasizes continuous improvement, employee engagement and empowerment.

One success story Sufrin pointed to concerns the company’s Wood Resources LLC business, and specifically Chester Wood Products in South ­Carolina.
“This plywood mill went through significant cultural change that led to incredible operational improvement,” Sufrin said. When Atlas purchased it, Sufrin said it suffered from a “dysfunctional” culture due to ambivalent corporate ownership. The operation proceeded to reduce unit production costs by more than 15% by increasing output, on-grade percentage and yield and keeping costs in check. They ran more than 1 million hours without a lost time incident. A culture change at the operation was driven by a focus on communication between management and labor, focus on safety and hygiene and cash payments for performance.

D’Ambrosio of Arclin spoke on the company’s experience with and emergence from Chapter 11 bankruptcy. He said the resins and adhesives company was created in summer 2007 based on a capital structure consistent with the most previous economic peak. Two years later, following the banking crisis, Arclin filed for Chapter 11 and subsequently emerged 173 days later.

The tactical plan to come out of bankruptcy focused not only on the tremendous financial and restructuring concerns, but also on Arclin’s continued emphasis on new product development, customer satisfaction and manufacturing sites upgrade. He said “not one customer order was missed during the bankruptcy process.”

When Arclin emerged from bankruptcy on January 15 of this year, it had reduced debt from $234 million to $60 million, while showing excellent liquidity and had retained nearly 100% of employees.

“We were all bankruptcy virgins,” D’Ambrosio said. “We were advised, but we put common sense into our ­business.”

“Our industry has credibility that we have developed with environmental groups as a result of our interaction on the formaldehyde issue, and they now understand our supply chain,” Julia said. “We came from 100-0 behind when we started, but on every position we prevailed.”

Julia remembered that when the Sierra Club called for a national formaldehyde standard two years ago and CPA agreed, “Many thought we were off-track.” Yet by working with the Sierra Club and other key groups in low-pressure negotiations outside the public eye, the opposing sides were able get what they wanted: restrictions on formaldehyde for environmental groups, and a less onerous and more consistent regulatory effort for industry.

According to Julia, the process is resulting in “critical legislation that in effect ‘fences off’ EPA from going on a fishing expedition with regulation board emissions, and it’s all possible because we thought outside the box.”

He added, “By seeking unconventional alliances, you grow your credibility and effectiveness to actually get things done.”

Roger Tutterow, Mercer University economics professor, informed those in attendance that the recession had technically ended in July ’09.

“If the recession is over, why doesn’t it feel better?” Tutterow asked, noting that such an economic contraction in so short of a time requires serious turnaround before all segments of the economy feel the upturn.

Tutterow added that may be a while, since he doesn’t see any major improvements until 2012 or 2013. “The big reason is the economy is not adding jobs, and until we see payrolls come back and jobs are added on Main Street, things aren’t going to feel much better.”

The economist noted that two of industry’s prime drivers—housing starts and building permits, have showed an 80% drop from peak to trough (and a 94% drop in the Atlanta area where PELICE was held). “When we get back to normal—we’re going to find the new normal is about 30% below the highs of 2003-4-5,” Tutterow said.

The OSB mill in Houlton, Me. has converted to LSL production and is running well. The company has completed several product code approvals.

Luoma noted that the product launch ran smack into the housing bust. He added, however, “If the product is right for the market and your customers, don’t let up, stay the course.” He emphasized the importance, especially during recessed markets, of keeping your sales force committed and motivated.
“Nothing in business is easy,” Luoma said. “Expect adversity. Adjust accordingly.”

David Harmon, North American Technical Manager with Hexion Specialty Chemicals, addressed how complying with CARB formaldehyde emission regulations impacts composite wood efficiency and costs. He noted that as recently as 2008, it was estimated that to reach CARB 2 emissions levels while maintaining acceptable panel properties might require up to 15% increased resin dosage and might also require up to a 15% decrease in production rate. It was also acknowledged that differences in available wood furnish and processing/manufacturing parameters from mill to mill would become both more critical and pronounced as newer technology products were being utilized to achieve CARB 2.

While the issue of increased criticality due to differences in wood furnish and manufacturing parameters has been found to be generally true, Harmon said, based on preliminary information about advances in the use of amino-formaldehyde based resin systems, as independently reported by Hexion technical services teams, that it is possible to mitigate this scenario by using the newer technology CARB 2 resin products that best fit in with the specific circumstances at each mill. He showed that preliminary information shows that the ranges of resin usage for particleboard and MDF has actually been under the 15% increase, and has been found to actually decrease the amount of resin being applied, while not impacting production.

He concluded that overall estimated manufacturing cost ranges using the new generations of CARB 2 type amino-based resin systems, with continued optimization of the new technology resin systems in the mills, one can project that the final costs will most likely trend to only slightly higher than that of historic manufacturing costs on a relative basis.

In one of the Energy To Emissions sessions, Aimee Andrews, managing consultant for Trinity Consultants, provided an overview of the EPA Mandatory Reporting of Greenhouse Gases, which points to March 2011 as the due date for the first annual GHG report for certain 2010 operations.

Andrew said this represents the first major EPA regulatory action affecting GHG reporting for industrial sectors and will form the basis for developing GHG policy, and this effort encompasses a large number of sectors and industries, up to 10,000 facilities representing 85% of GHG emissions in the U.S. She said EPA continues to refine the reporting requirements.

David Jesseau and Scott Manion of Pöyry Forest Industry Consulting spoke on the “The Execution Gap,” which they defined as the difference between the current realities of performance and what is achievable on a sustained basis with the same assets and strategy.

“Opportunity exists in all operations,” Jesseau said, citing typical gains of 5% to 10% of revenue. He said the keys in this effort are understanding asset potential, developing management systems, implementing these systems and sustaining the culture of the operation. A mill must target specific operational improvements, focus on what is controllable and identify the associated financial impact, while developing easy evaluation and reporting tools. Everyone must be trained and held accountable to make it work, he said.

Darrell Keeling, VP-Composite Manufacturing, Roseburg Forest Products, spoke on the industry’s effort to get the USDA to refine its Biomass Crop Assistance Program. He noted that as originally implemented, BCAP paid to eligible material owners who deliver eligible materials to a Biomass Conversion Facility a matching payment up to $45/ton. The eligible materials have included sawdust, shavings and mill wood waste, the lifeblood raw material for the composite panel industry. This “subsidized” diversion of material in essence promotes the development of another industry at the cost of an existing one, the composite panel industry, as well as the downstream users of composite panels.

Keeling said BCAP was originally intended to develop new sources of biomass, but instead is redirecting fully utilized materials already in the stream of commerce to lower value uses. He called for BCAP to exclude from its eligible materials list those residues used by the composite panel industry and to specifically list them as excluded.